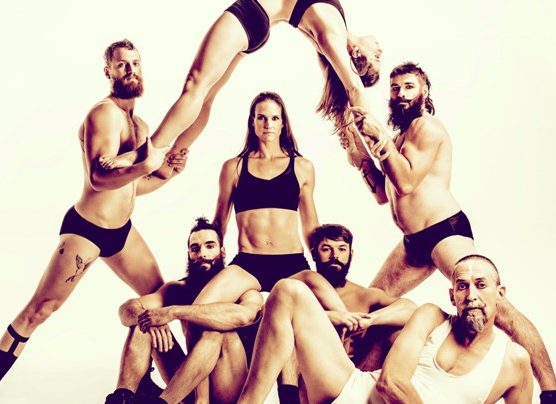 Cirque Alfonse’s BARBU Cabaret delves into the origins of the circus in Montreal at the end of the 19th and beginning of the 20th century. Imagine a fairground, where spectators are left spellbound by remarkable performances and outrageous feats, simple curiosities and unexpected eccentricities. Political correctness has no place in the mayhem of this show. In scene after scene where music, video, circus and general craziness collide, each performer wows the audience with a showcase of spectacular skills. May the best beard win! Backed by a frenetic electro-trad band, the Cirque Alfonse clan strays dangerously close to the edge in this exuberant circus rave.

Fuelled by a wonderfully enlivening folk-rock score, this is joyously naughty, laugh-out-loud witty and unpretentiously camp…

Hilarious, random and deliriously sexy, BARBU is the most captivating alternative circus show that anyone could hope to see this summer.

It is a perfect way to lose yourself for an evening. Strange, curious, sexy, quirky and an enormous amount of fun. There is even an opportunity to buy shots and partake in a cheeky raffle. So what are you waiting for? Book your tickets now. This is essential viewing this Summer.

Cirque Alfonse is a circus company from Saint-Alphonse-Rodriguez in the province of Quebec, established in 2005. Its founding members have all worked with some of the most renowned “nouveau cirque” companies around the world. This young company is comprised of a team of professional acrobats graduated from the École nationale de cirque de Montréal, as well as a professional dancer, an Grandpa Alain and three talented and versatile musicians. This brave and creative group of young performers is blazing a creative path that no one has yet dared to explore, blending the arts and techniques of the circus and infusing them with the most picturesque facets of traditional Quebec folklore.