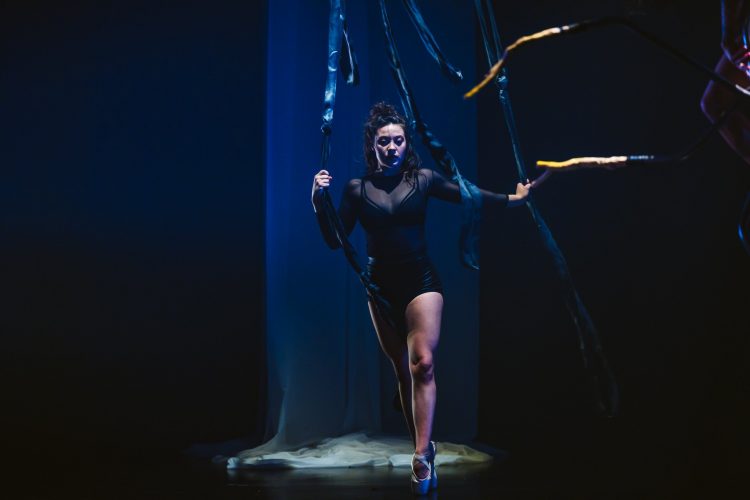 NYX revisits archetypal elements of femininity, rooted in Johanne Madore’s childhood memories of her family’s women’s clothing shop and business: the world of women who evolved there, the small hands of the seamstresses, guided by the words of her grandmother, matriarch reigning over the basement storage where fabrics, skins and furs were piled up in large folds

Embodying greatness of soul, wisdom and passing on, the death of the elder 106 years old triggers the creative process of the NYX project, named after the Greek goddess of the night. From then on, the two become one: embroiderers of memories and sometimes of fabrications, shamans able to guide souls lost between death and birth, between Eros and Thanatos, through the meanders of the forest, through the nocturnal of life, through the kingdom of NYX.

NYX is a contemporary hybrid work blending circus arts, contemporary dance and visual arts. The writing, research and creation of NYX spanned over four years. The world premiere was presented at Le Diamant in Québec City in October 2022.

In a dreamlike and mythological universe, six women radiate their light and sensuality through breathtaking aerial acts, bewitching choreographies, their bodies intertwined in original acrobatic sculptures.

Nyx will bewitch and envelop the spectator in a luminous and poetic warmth.

An interdisciplinary practitioner of the performing arts, Johanne Madore has forty years of experience as a performer, choreographer, director and writer.  She has performed locally, nationally and internationally in dance, theater, opera, circus, film and performance with companies such as Carbone 14, Ex Machina, O Vertigo Danse, 4D Arts, Le Cirque Éloize, Corpuscule danse, etc. She is co-founder with the visual artist Pierre Przysiezniak of the collectives Les Intercesseurs, Les Rugissants and today Le Collectif Chimère. Their collaborative work, in search of new forms of practice and scenic aesthetics, pays particular attention to the sensitive relationship between the body, materials and the narratives that emerge: Antennae (1998), La jeune femme et la mort (1999) and Monarca (2004), NYX, etc. A passionate creator who cherishes collective intelligence, Johanne Madore is concerned with contributing the talents and knowledge of the artists invited into the creative process. Since 2006, she has contributed to the emergence of a contemporary Quebec circus by training and inspiring the next generation of circus artists at the National Circus School while undertaking a cycle of creations hybridizing acrobatic gesture, visual arts and dance. Her work has been presented at several international events, including: Les Mandalas du désir (2008); Croisé (2012), which has received several international invitations, including La Grainerie in Toulouse and the Cirque-Théâtre d’Elboeuf (FR); Les Étinceleurs (2016); Les constellations amoureuses (2017); Barok XX1 (2019); and the film “La somme de nos rêves” in international competition at the FIFA – art film festival (2021)


Pierre Przysiezniak, visual artist and researcher, started off in the graphic arts before exhibiting his hybrid narrative works in Montreal’s contemporary art galleries in the early 80’s. Passioned by the craft of painting backdrops, he moved on to an apprenticeship at the opera, becoming through the years a master scenic craftsperson and initiating a cycle of explorations of new processes in stage design, which he approaches as a visual artist sensitive to materials, and their intrinsic expressiveness. Sculpting space and volumes in atonement with the humans present, he unravels his visual experimentations on stage through his personal and collaborative interdisciplinary work. He has lectured, coached and mentored scenic painting and design arts at the Université du Québec in Montréal as well as at the National Theater School of Canada. Since 2010 he has been pursuing a drawing practice he describes as « nanographic, biomimetic and quantic », in quest of the movements and structures of Nature of which we are made of. He has organised and animated exchange workshops between scientists and artists, published, presented papers and participated in round-tables about his visual and stage art and is the recipient of numerous grants, prizes and residencies in the graphic, visual, interdisciplinary, theatre and circus arts.

Acrobatic choreographies: Johanne Madore with the collaboration of the artists

With the support of :